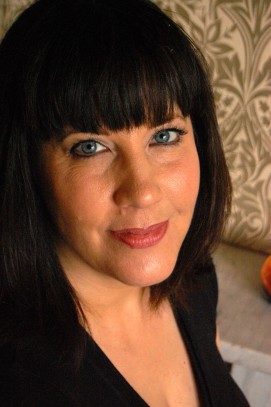 Andrea Samuelson’s poetry has won national competitions including the Peterloo Prize. Her poetry collection Cradle Song (Mothlight Press, 2011) is being followed by a novel, Scordatura. She is represented by CMLA.

This is the road the river left behind,
the way it went.

The air is burdened with the memory of water,
evidence of flood.

Here the fruit grows wild and no one picks it.
Purple figs and livid pomegranates

They say the devil does not speak
when there is nothing to speak of.

Whole injuries lie immersed in silence
sitting on a scarred sofa, cracked to the frame

sitting by the edge of the path,
at the wheel of an abandoned car

saturated in cricket-song.
Air bubbles rise to the surface

of an immense avoidance.
The first fine dots of rain

sharp as pipa shells, vanish
in the dust. But more will come, and more.

the wild corn in the field beyond
grows higher than the clouds.

It is a temporary peace, that hangs in the air
blue as gunsmoke,
down at the Council ponds where the pike
push their way through deep water,
suede flanks flickered with a bloom
luminous as mildew on the old man’s wedding suit.
Scumbag. The crackle of school
has vanished; this is what it is like
to live in water, where the giant carp
move slow as blood cells on a classroom screen.
The red cells ate the white, or the white ate the red,
it never seemed to matter; the motion was the point –
that slow intent. The boys swap bait,
tip their pale throats to a Tennant’s Extra,
silent, listening for a call that never comes.
After a war, the only things left behind
are pockmarked Madonnas with dirty mouths,
kidney bowls and chipped white skirting boards,
things the looters didn’t want.
Some stains never come out, but here
the grassy banks are leoparded with light,
the fish are lavender, they whisker the smoky water
and open their mouths up for the hook
easy, like everything could be that way.


Back to The Needlewriters’ Companion