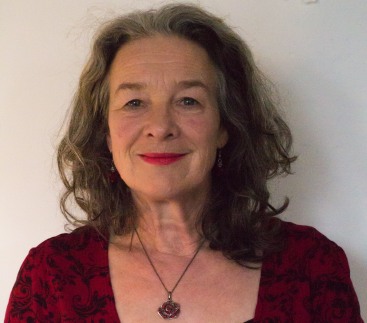 Jackie Wills has published six collections including Woman’s Head as Jug (Arc, 2013 and Commandments (2007). She has earned her living as a writer since 1978.

As we drive away from Orange Farm

they walk out of the night, following a fence,
an invisible path, or halting at crossroads
to hold cigarettes for sale, one by one, invisible

until they’re close enough to touch.
The road and night roll together in dust,
releasing people into cities, onto empty verges,

reveal them in twos, alone – a man
made into a giant by the trolley he pulls,
a woman whose child is a curve on her back.

Thin men in tracksuits are dark as the charred
marshlands they cross. They are you and me,
strangers to everyone, alive only in headlamps
between here and there.

On not making it to the peak, Solomon

Lizards scuttle off the path, undergrowth
crackles with paws or hooves.

The smoke of forest fire lingers in the scrub
as I pass a grove of old, pale trees,

bending over a fallen trunk.
The way to the peak is blocked, Solomon

so I refuse to climb any further, even though
the moon is full and it’s your funeral night.

On the track twisting back to the village
I step over shadows as you did, thinking them solid.

How does it compare, the only landscape you saw
before asking ‘who’s pulled the curtain?’

You were four – but now, on the southern tip
of your continent, among leadwood and guavas,

the moon on a grass roof reminds me
of our walk up a mountain in Yorkshire,

five or six of us, behind a farmhouse rented for a week.
It started to snow. You stopped by a rock,

faced the storm’s blank view and wouldn’t go on.
You could outargue anyone, so we left you alone,

until a party of walkers came out of the blizzard
and showed you the way down. It’s winter here too

and a tornado the other night could have been you,
visiting. Are you that white-breasted bird resting on a log?

Or the leafy-winged bat I watched disappear
into the lace of moon, mountain and forest?


[“On not making it to the peak, Solomon” was first published in The Warwick Review.]