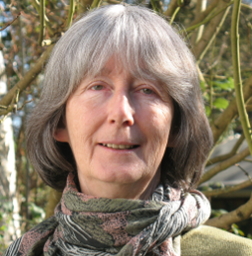 Judith Cair was born in Somerset. She has worked as a potter and as a teacher. In 2013 a pamphlet of her poetry, The Ship’s Eye, was published by Pighog Press.

Bewildered by her easy opulence,
her air of casual command, he flinched;
his hands grew clumsy, shook on proffering
a glass, a book, a mislaid parasol.
He’d stumble over long-rehearsed adieus,
his compliments reduced to barren pauses
replete with her disdain. He shrank away,
shunned all her ‘afternoons’. She came to him
in dreams where, languorous, she’d beckon him
to turn her pages as she sang of tears,
of Sehnsucht, tormenting him, till he awoke –
and strained to catch those melodies again
over the sounds of dawn in Clerkenwell.


In Woods of Alder

Beached on an island more fertile than his own,
luxuriant though untended, at length he found
a cave whose mouth was lightly overgrown

with vines – a screen of tendrils to surround
the hidden one, the goddess whose very name
conceals: Calypso. And there he went to ground

for seven years, forgot the distant claims
of home, forsook his path as a true man
who’d never cease from hunting fragile fame –

became the servant of a beauty more than human,
as it glowed in the dark cave, a shrouded light
which blinded him to all other forms of woman.

Men cannot love as gods: their souls take flight
from the undying present; they count their years
in dreams and memories of past delights.

He’d clamber up a headland, gaze in tears
across the sea towards home, while she’d unite
in one proud plea her longings and her fears.