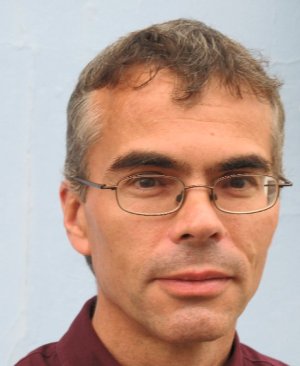 Robert Dickinson was born in London and now lives in Brighton. Micrographia, his first full collection, was published by Waterloo Press in 2010.

The house talks in its sleep.
Light switches hum in the dark,
something clicks under the stairs.

A floorboard creaks, once,
as if stepped on, the stress
of keeping everything in place.

A shift of load-bearing walls,
a brief disequilibrium.
The house cannot keep still.

It shudders at a passing van,
braces against the passing rain,
holds itself together one more night.

What survives is bleach and cigarettes,
the unfairness of teachers
whose names she almost remembers,
the boredom of all afternoons.

Half awake, she walks along corridors
past rooms where she also sits.
She will tell you the stories.
They are important and vague.

In one she pushes a girl she hates
into that road near a bridge.
In another she is the one falling
in front of cars that barely stop.

Sometimes the road is empty,
sometimes it’s bicycles, and a path,
half overgrown at the edge of a field.
The violence grows with each telling.

Scratches, bruises, broken fingers.
She has forgotten her lessons
and clutches at the bedsheets,
her hand weak as a pigeon’s foot.

She looks up, expecting blame
or consolation. It changes,
day to day, minute to minute.
She waits for familiar faces,

seeing them, sometimes, in yours.